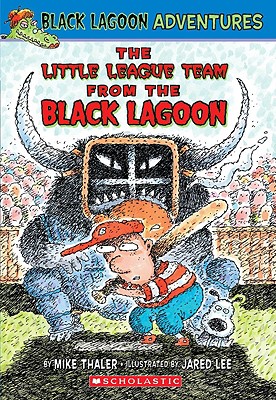 The next trade release from the hugely popular book club series by Mike Thaler and Jared Lee. These fun-filled chapter books mix school, monsters, and common kid problems with hilarious results.Baseball fever is catching, but Hubie just feels sick!Everyone is going batty because baseball tryouts are coming up. Too bad, last season, the only hit Hubie got was in the head when he missed catching the ball. Will Hubie knock one out of the park and make the team or will it be another strikeout?

Mike Thaler was born in Los Angeles in 1936. After moving to New York City, he started his professional career drawing cartoons for adults in 1960. A children's book editor saw one of these cartoons and encouraged Mike to write for children. Since then, Mike has written over 140 children's books and has become known as America's "Riddle King." Mike says that writing and riddles are a powerful way to stimulate a child's interest in learning and creating. He is an award-winning author and illustrator and has been called "one of the most creative people in children's literature." Mike currently lives in Canby, Oregon.

Jared Lee has illustrated more than 100 books for young readers. He has received awards from the Society of Illustrators, the Martha Kinney Cooper Ohioana Library Association, the National Cartoonists Society, and others. He lives in Ohio with his wife and a menagerie of dogs, cats, ponies, ducks, and a few unknown creatures.
Loading...
or support indie stores by buying on