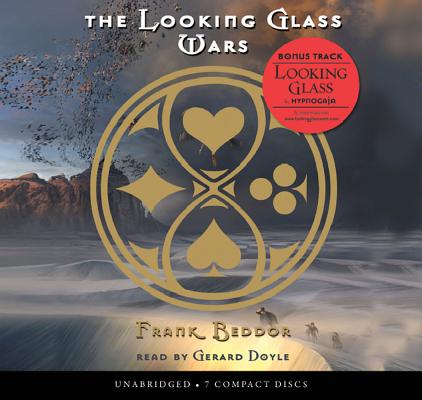 The "true story" behind Alice in Wonderland Princess Alyss Heart is brutally cast out of Wonderland by her vicious Aunt Redd, who beheads Alyss' mother (Off with her head, she cries ) and begins to rule over Wonderland with an iron fist. Alyss escapes from Wonderland and is exiled to another world entirely--Victorian London--where she is adopted into a new family, renamed Alice, and befriended by Lewis Carroll. At age 20 she returns to Wonderland to battle Redd, reclaim the throne, and lead Wonderland into its next golden age of imagination.

Frank Beddor spent years tracking Alyss and the fractured truth of Wonderland's parallel existence before writing one word of his trilogy. Currently, Frank has gone underground somewhere in Los Angeles, California, to avoid the impassioned vigilantes at literary odds with his radical revelations while he finishes work on Seeing Redd, book two of The Looking Glass Wars trilogy.Enter www.lookingglasswars.com to learn more. A multi-talented, multi-faceted individual, Frank Beddor is a former World champion in freestyle skiing and a Hollywood film producer whose credits include THERE'S SOMETHING ABOUT MARY. Another interesting bit of trivia about Frank is that he was the stunt skier for John Cusack's character in the movie BETTER OFF DEAD.
or
Not Currently Available for Direct Purchase
Copyright © 2020 American Booksellers Association