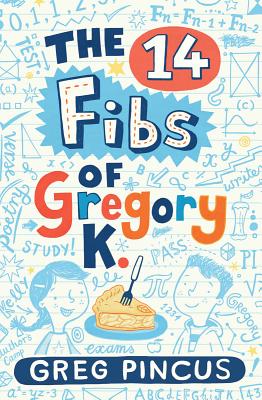 Gregory K is the middle child in a family of mathematical geniuses. But if he claimed to love math? Well, he'd be fibbing. What he really wants most is to go to Author Camp. But to get his parents' permission he's going to have to pass his math class, which has a probability of 0. THAT much he can understand! To make matters worse, he's been playing fast and loose with the truth: "I LOVE math" he tells his parents. "I've entered a citywide math contest!" he tells his teacher. "We're going to author camp!" he tells his best friend, Kelly. And now, somehow, he's going to have to make good on his promises.

Hilariously it's the "Fibonacci Sequence" -- a famous mathematical formula! -- that comes to the rescue, inspiring Gregory to create a whole new form of poem: the Fib! Maybe Fibs will save the day, and help Gregory find his way back to the truth.

For every kid who equates math with torture but wants his own way to shine, here's a novel that is way more than the sum of its parts.

Praise For The 14 Fibs of Gregory K.…

“Pincus's story explores struggles with friends, family, and learning while remaining exuberant and relatable, a winning equation.” -- Publishers Weekly
“This delightful novel introduces a resourceful and inspiring young character, and many readers will relate to Gregory’s desire for creative expression and his yearning for acceptance.” -- Booklist
"Gregory’s difficulties with being different from his parents, living in his older brother’s shadow, and feeling inadequate compared to a smart younger sister will strike a familiar chord with middle-graders struggling to define themselves. There’s a lot of space for this book to open up cross-curricular opportunities in math and literature, and it might also spark interesting book club conversations about how to deal with families whose interests diverge drastically from our own." -- Bulletin of the Center for Children's Books
"Dialogue and humor carry the third-person narrative along swiftly, and the characters are appealing. It is unusual to meet a family in middle-grade fiction that enjoys playing math games at the table, and it’s refreshing to be reminded of the importance of honesty with family and friends. By any reckoning, a successful debut." -- Kirkus Reviews


Booklist Reviews
Math-hater Gregory tries very hard to fit in with his math-loving family, even though what he really enjoys is writing and sharing poetry with his best friend, Kelly. His failing math scores mean that he has to spend summer at math camp, ruining his plans to spend the summer at author camp with Kelly. Still trying to find a way out, Gregory begins telling fibs to make those around him think that math camp is, indeed, the plan, and the ensuing mayhem caused by multiple fibs creates enough action and intrigue to keep readers fully engaged. The solution to Gregory’s dilemma involves poetry designed using the Fibonacci sequence, and each chapter heading is a Fibonacci-sequence poem that forecasts Gregory’s fibs. This delightful novel introduces a resourceful and inspiring young character, and many readers will relate to Gregory’s desire for creative expression and his yearning for acceptance.

Publishers Weekly Reviews
Everyone in Gregory's family adores math—everyone, that is, except Gregory. While his parents and siblings live for the yearly City Math contest, Gregory prefers writing, especially poetry. Gregory has promised his best friend Kelly that he will attend Author Camp with her, despite not having asked his parents. When his math teacher announces that Gregory may fail math, it might as well be the fall of Rome as far as Gregory's parents are concerned—and it results in Gregory constructing an outrageous lie that threatens to backfire. Gregory is a buoyant narrator whose extreme math phobia and obsessive love of pie (and definitely not pi) give his character an idiosyncratic shine. Hyperbolic details, like his mother's "Weird Wednesday" family dinners, are interspersed with passages from Gregory's extra credit math journal, where his ruminations on the Fibonacci sequence and "Fib poetry" give readers access to deeper reflections on mathematics, metaphor, and the places where they might overlap. Pincus's story explores struggles with friends, family, and learning while remaining exuberant and relatable, a winning equation.

Greg Pincus is a children's poet and novelist, a screenwriter, a former volunteer elementary school librarian, and a social media strategist. He is also an active member of the Society of Children's Book Writers and Illustrators. He lives in Los Angeles, California, and can be found online at gottabook.blogspot.com, or on Twitter as @GregPincus.
Loading...
or
Not Currently Available for Direct Purchase