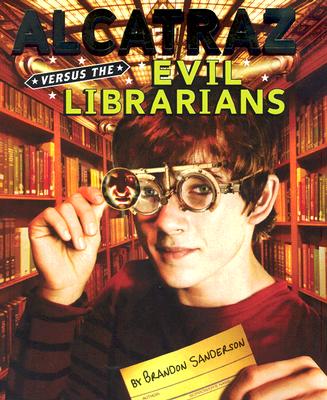 Alcatraz Versus the Evil Librarians

A hero with an incredible talent...for breaking things. A life-or-death mission...to rescue a bag of sand. A fearsome threat from a powerful secret network...the evil Librarians.

Alcatraz Smedry doesn't seem destined for anything but disaster. On his 13th birthday he receives a bag of sand, which is quickly stolen by the cult of evil Librarians plotting to take over the world. The sand will give the Librarians the edge they need to achieve world domination. Alcatraz must stop them!...by infiltrating the local library, armed with nothing but eyeglasses and a talent for klutziness.


Praise For Alcatraz #1: Alcatraz Versus the Evil Librarians…

"Elantris is the finest novel of fantasty to be written in many years. Brandon Sanderson has created a truly original world of magic and intrigue, and with the rigor of the best science fiction writers he has made it real at every level. What makes this novel unforgettable, however, is the magnificent characters he has created." --Orson Scott Card

STAR "smoothly written, perfectly balanced narrative; by the end readers won't want to put it down. As the blurb from Orson Scott Card suggests, Sanderson is a writer to watch." --PW

Brandon Sanderson is the author of the Mistborn Trilogy and Elantris, which Orson Scott Card called "the finest novel of fantasy to be written in many years." Alcatraz Smedry Versus the Evil Librarians is Brandon's first book for kids. He writes and plays with swords in Provo, Utah.
Loading...
or
Not Currently Available for Direct Purchase