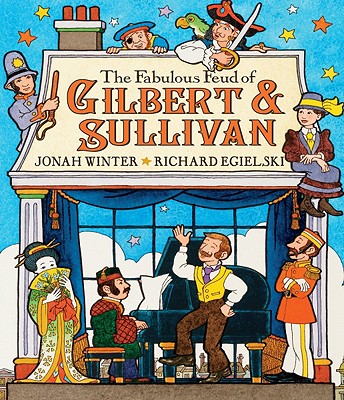 The Fabulous Feud of Gilbert & Sullivan

Caldecott Medalist Richard Egielski teams up with Jonah Winter for a story of friendship, fights, and musical comedy!

Welcome to Topsy-Turvydom, a magical kingdom (well, more like an opera stage) full of pirates, policemen, fairies, and fake mustaches! Mr. Gilbert and Mr. Sullivan have ruled this kingdom together in peace, but one day, Mr. Sullivan decides he's had enough. Every opera they write is the same silly old story, and he's ready for something different. Something serious!
Mr. Gilbert is stunned. He's lost his business partner and his best friend, and he needs a brilliant idea in order to get him back.

Jonah Winter has written many exciting picture book biographies for children, with subjects that include Frida Kahlo, Diego Rivera, Barack Obama, and Dizzy Gillespie. He lives in Pittsburgh, PA.

Richard Egielski received the 1987 Caldecott Medal for HEY, AL, story by Arthur Yorinks, and he has also illustrated texts by Pam Conrad, Margie Palatini, David LaRochelle, and Jonah Winter. The books he has both written and illustrated include BUZ and JAZPER, both named Best Illustrated Children's Books of the year by The New York Times.