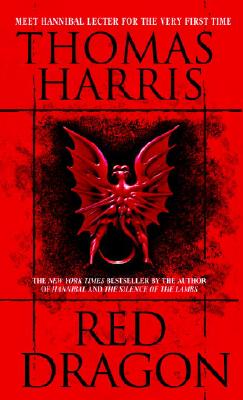 MEET HANNIBAL LECTER FOR THE FIRST TIME.
In the realm of psychological suspense, Thomas Harris stands alone. Exploring both the nature of human evil and the nerve-racking anatomy of a forensic investigation, Harris unleashes a frightening vision of the dark side of our well-lighted world. In this extraordinary novel, which preceded The Silence of the Lambs and Hannibal, Harris introduced the unforgettable character Dr. Hannibal Lecter. And in it, Will Graham the FBI man who hunted Lecter down risks his sanity and his life to duel a killer called the...Red Dragon.

"Breathtaking. All forces converge with an apocalyptic bang!"—New York Times

"Fast-paced, all too realistic... with a shattering climax."—Kirkus Reviews

"A spellbinder... The race to save the Super Bowl is hair-raising, one that will keep you rooted to your chair."—Hartford Courant

"Want to faint with fright? Want to have your hair stand on end? Want to read an unforgettable thriller with equal parts of horror and suspense? Harris was obviously only warming up with his best seller Black Sunday."—Daily News, New York

"Irresistible... A shattering thriller... Readers should buckle themselves in for a long night's read because from the first pages... Harris grabs hold."—Publishers Weekly

"The scariest book of the season."—Washington Post Book World

"Easily the crime novel of the year."—Newsday

A native of Mississippi, Thomas Harris began his writing career covering crime in the United States and Mexico, and was a reporter and editor for the Associated Press in New York City. His first novel, Black Sunday, was published in 1975, followed by Red Dragon in 1981, The Silence of the Lambs in 1988, and Hannibal in 1999.
Loading...
or
Not Currently Available for Direct Purchase