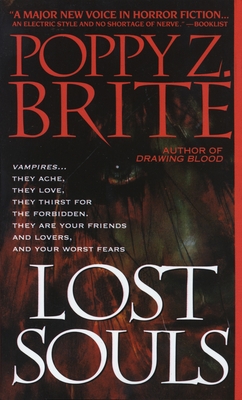 Vampires . . . they ache, they love, they thirst for the forbidden. They are your friends and lovers, and your worst fears.

“A major new voice in horror fiction . . . an electric style and no shortage of nerve.”—Booklist

At a club in Missing Mile, N.C., the children of the night gather, dressed in black, look for acceptance. Among them are Ghost, who sees what others do not; Ann, longing for love; and Jason, whose real name is Nothing, newly awakened to an ancient, deathless truth about his father, and himself.

Others are coming to Missing Mile tonight. Three beautiful, hip vagabonds—Molochai, Twig, and the seductive Zillah, whose eyes are as green as limes—are on their own lost journey, slaking their ancient thirst for blood, looking for supple young flesh.

They find it in Nothing and Ann, leading them on a mad, illicit road trip south to New Orleans. Over miles of dark highway, Ghost pursues, his powers guiding him on a journey to reach his destiny, to save Ann from her new companions, to save Nothing from himself. . . .

“An important and original work . . . a gritty, highly literate blend of brutality and sentiment, hope and despair.”—Science Fiction Chronicle

“A major new voice in horror fiction . . . an electric style and no shortage of nerve.”—Booklist

“An important and original work . . . a gritty, highly literate blend of brutality and sentiment, hope and despair.”—Science Fiction Chronicle

“Big talent gives off thermonuclear vibes. I can feel them. The last time I said it, I was talking about Dan Simmons. Now I'm saying it about Poppy Z. Brite”—Harlan Ellison

Poppy Z. Brite’s first novel, Lost Souls, was nominated for Best First Novel of 1992 by the Horror Writers Association and for a Lambda Literary Award. Her second book, Drawing Blood, was also nominated for a Lambda Literary Award and the Bram Stoker Award. Her short stories have appeared in numerous anthologies. She lives and writes in New Orleans.
Loading...
or support indie stores by buying on