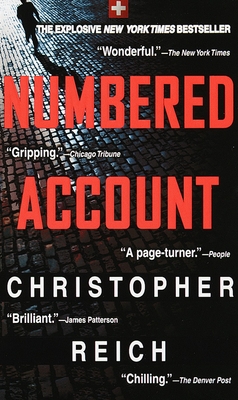 Nick Neumann had it all: a Harvard degree, a beautiful fiancée, a star-making Wall Street career.  But behind the dazzling veneer of this golden boy is a man haunted by the brutal killing of his father seventeen years before.

Now chilling new evidence has implicated his father's employer, the United Swiss Bank, in the crime.  Nick doesn't know how.  Or why.  But he has a plan to find out: move to Zurich.  Work for the same bank.  Follow in his father's footsteps.  Look for the same secrets...and uncover something so shocking, so unexpected, justice may not be enough.

For as a circle of treachery tightens around him, as a woman with secrets of her own enters his life, Nick makes another chilling discovery.  Not just about his father but about himself.  And how far he's willing to go to find out what happened seventeen years before--when a man died and a conspiracy was born.

Christopher Reich was born in Tokyo and grew up in Los Angeles.  He worked in the private banking department of a major Swiss bank in Geneva before joining the bank's department of mergers and acquisitions in Zurich.  In 1995 he decided to pursue writing full-time.  He lives in Texas with his wife and child.
Loading...
or
Not Currently Available for Direct Purchase