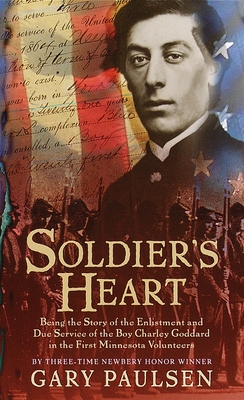 In June 1861, when the Civil War began, Charley Goddard enlisted in the First Minnesota Volunteers. He was 15. He didn't know what a "shooting war" meant or what he was fighting for. But he didn't want to miss out on a great adventure.

The "shooting war" turned out to be the horror of combat and the wild luck of survival; how it feels to cross a field toward the enemy, waiting for fire. When he entered the service he was a boy. When he came back he was different; he was only 19, but he was a man with "soldier's heart," later known as "battle fatigue."

Praise For Soldier's Heart: Being the Story of the Enlistment and Due Service of the Boy Charley Goddard in the First Minnesota Volunteers…

"A stark, utterly persuasive novel of combat life in the Civil War that may well challenge generations of middle-school readers."--The New York Times

"Paulsen's storytelling is so psychologically true that readers will feel they have lived through Charley's experience."--Publishers Weekly, Starred

"The nightmare of the Civil War comes to the pages in this novel from Paulsen . . . based on the real-life experiences of a young enlistee."--Kirkus Reviews, Pointer

"The novel's spare, simple language and vivid visual images of brutality and death on the battlefield make it accessible and memorable to young people."--Booklist, Starred

Gary Paulsen is the author of more than 100 books.
Loading...
or support indie stores by buying on