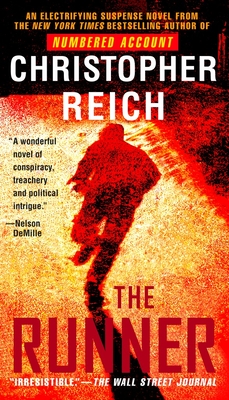 Christopher Reich dazzled readers and defied expectations with his New York Times bestseller, Numbered Account, a breathtaking classic of modern suspense. Now Reich returns to the world of international thrillers with a no-holds-barred powerhouse of a novel set against the seething backdrop of post—World War II Germany....

July 1945. U.S. attorney Devlin Judge has come to Europe as part of an international tribunal to try Nazi war criminals. But Judge has his own personal agenda: to find Erich Siegfried Seyss, the man responsible for his brother’s death.

An SS officer and former Olympic sprinter, Seyss has just escaped from a POW camp, leaving a trail of bodies in his wake. But he won’t escape Devlin Judge.

Between the two men are miles of German countryside ... and the beautiful daughter of one of Nazi Germany’s most powerful families — a woman loved by them both.

But as Judge hunts his prey across a devastated nation, he finds himself caught up in a staggering conspiracy. Because Erich Seyss is no rogue SS killer. He is a man running a final race to make one last, unforgettable contribution to the Fatherland. And he is acting on orders from the last person anyone would ever suspect.

Praise For The Runner: A Novel…

“A wonderful novel of conspiracy, treachery and political intrigue . . . Reich evokes the fascinating world that existed between the hot war and the cold war—he is a master of atmosphere and detail.”—Nelson DeMille, author of The Lion’s Game

“This is thriller-writing on the grand scale.”—The Denver Post

“Move over, Jack Higgins and Robert Ludlum, Reich has grabbed hold of your genre and made it sing. The Runner is an intriguingly crafted cat-and-mouse hunt.”—San Francisco Examiner

“Reich is good news for insomniacs who need an excuse to stay up till the wee hours.”—Daily News (New York)

Christopher Reich was born in Tokyo in 1961. A graduate of Georgetown University and the University of Texas at Austin, he worked in Switzerland before returning to the United States to pursue a career as a novelist. The author of the New York Times bestselling thriller Numbered Account, he lives in Texas with his wife and children.
Loading...
or
Not Currently Available for Direct Purchase