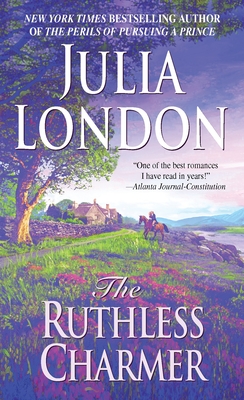 The Rogues of Regent Street

No woman could resist Julian Dane. Except Lady Claudia Whitney. Julian had known her since childhood, but the headstrong lass had grown into a beautiful woman. Julian vows to teach her everything he knows about passion. But Claudia, in her most innocent ardor, promises to challenge him to the most dangerous emotion of all: wild, all-consuming love.

The rogue met his match in the woman he was forced to wed....

Julia London was raised on a ranch in West Texas, where she spent her formative years in the middle of vast wheat fields driving a tractor at the reckless speed of five mph. In spite of her humble beginnings, Julia went on to earn a degree in government and eventually landed in Washington, D.C. There for nine years, Julia had her brush with greatness when one day she actually shared an elevator with a senator from Iowa. She eventually returned to Texas and now lives in Austin with two enormous Labrador retrievers. Wicked Angel is Julia's second book and a sequel to her first, The Devil's Love. Julia is currently working on her next book for Dell.

Praise For The Ruthless Charmer: The Rogues of Regent Street…