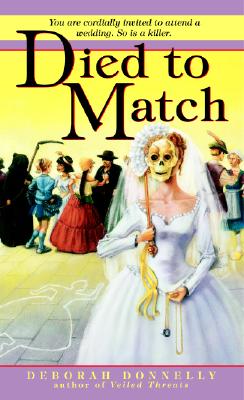 Luke Skywalker was juggling martini glasses. Albert Einstein was dirty-dancing with Monica Lewinsky. And Zorro was arguing with Death himself. For wedding planner Carnegie Kincaid, it was just another night on the job: a coed bachelor party thrown by one of Seattle’s hippest couples—the bride-to-be a hard-charging Microsoft millionaire, the groom a Seattle Sentinel news editor.

But what started as the perfect evening for the young, handsome, and politically correct ended in disaster. One beautiful bridesmaid was dead, and another had thrown herself into Elliott Bay. Now Carnegie has more than a cutting-edge wedding to save. All around her, secret liaisons are unraveling, dangerous decisions are coming to light, and at least one criminal is lurking. With families to please, dresses to hem, and headlines to grab, Carnegie is discovering the dark side of love and marriage amid high and low Seattle society—and that while some passions may be forever, some are a motive for murder.

Deborah Donnelly is a sea captain’s daughter who grew up in Panama, Cape Cod, and points in between. She’s been an executive speechwriter, a university librarian, a science fiction writer, and a nanny. A longtime resident of Seattle, and a bloomingly healthy breast cancer survivor, Donnelly now lives in Portland, Oregon.
Loading...
or
Not Currently Available for Direct Purchase