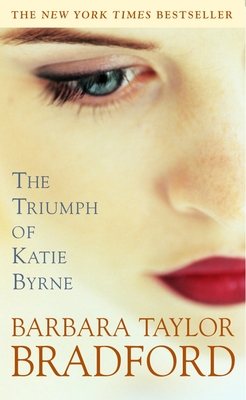 The Triumph of Katie Byrne

Barbara Taylor Bradford has enthralled millions of readers with her New York Times bestsellers, unforgettable tales that explore the rich tapestry of the human heart. Her new novel is no exception. The Triumph of Katie Byrne weaves a powerful and compelling story of one woman’s struggle to reclaim her future — by unraveling the dark mysteries of her past....

In London, Katie Byrne is an American actress on the verge of a triumph. But Katie seems barely aware of her charisma or her fortune. Caught up in a relentless quest for perfection onstage, Katie is not sure she will accept the career-making role she has been offered, even less sure that she could do justice to the part.

Suddenly, Katie seems incapable of taking the steps she has dreamed of taking all her life — of claiming her life as an actress and of letting a promising love affair blossom. For Katie, the answer lies in a past she has shared with almost no one, in the small Connecticut town where she was born and raised in an adoring, close-knit family.

There, on a fall day ten years before, tragedy crossed Katie Byrne’s path. Now she must return there — for answers, for a miracle, and for the kind of forgiveness that can set her free....

Praise For The Triumph of Katie Byrne: A Novel…

Where You Belong
A Sudden Change of Heart

Barbara Taylor Bradford was born in Leeds, Yorkshire, and was a reporter for the Yorkshire Evening Post at sixteen. By the age of twenty, she had become both an editor and a columnist on London’s Fleet Street. In 1979 she wrote her first novel, A Woman of Substance, and that enduring bestseller was followed by sixteen others. Ten have been made into television miniseries and movies of the week. Her novels have sold more than sixty-three million copies in thirty-nine languages worldwide. She lives in New York City with her husband, producer Robert Bradford.
Loading...
or
Not Currently Available for Direct Purchase