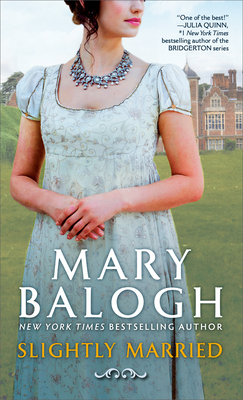 Meet the Bedwyns…six brothers and sisters—men and women of passion and privilege, daring and sensuality…Enter their dazzling world of high society and breathtaking seduction…where each will seek love, fight temptation, and court scandal…and where Aidan Bedwyn, the marriage-shy second son, discovers that matrimony may be the most seductive act of all.…

Like all the Bedwyn men, Aidan has a reputation for cool arrogance. But this proud nobleman also possesses a loyal, passionate heart—and it is this fierce loyalty that has brought Colonel Lord Aidan to Ringwood Manor to honor a dying soldier's request. Having promised to comfort and protect the man's sister, Aidan never expected to find a headstrong, fiercely independent woman who wants no part of his protection…nor did he expect the feelings this beguiling creature would ignite in his guarded heart. And when a relative threatens to turn Eve out of her home, Aidan gallantly makes her an offer she can't refuse: marry him…if only to save her home. And now, as all of London breathlessly awaits the transformation of the new Lady Aidan Bedwyn, the strangest thing happens: With one touch, one searing embrace, Aidan and Eve's “business arrangement” is about to be transformed…into something slightly surprising.

New York Times bestselling, multi-award-winning author Mary Balogh grew up in Wales, land of sea and mountains, song and legend. She brought music and a vivid imagination with her when she came to Canada to teach. There she began a second career as a writer of books that always end happily and always celebrate the power of love. There are over four million copies of her Regency romances and historical romances in print.
or
Buy Here
Copyright © 2020 American Booksellers Association