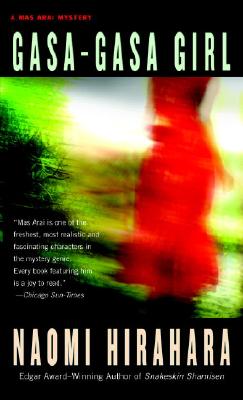 From the time she was a child, Mas Arai’s daughter, Mari, was completely gasa-gasa–never sitting still, always on the go, getting into everything. And Mas, busy tending lawns, gambling, and struggling to put his Hiroshima past behind him, never had much time for the family he was trying to support. For years now, his resentful daughter has lived a continent away in New York City, and had a life he knew little about. But an anxious phone call from Mari asking for his help plunges the usually obstinate Mas into a series of startling situations from maneuvering in an unfamiliar city to making nice with his tall, blond son-in-law, Lloyd, to taking care of a sickly child…to finding a dead body in the rubble of a former koi pond.

The victim was Kazzy Ouchi, a half-Japanese millionaire who also happened to be Mari and Lloyd’s boss. Stumbling onto the scene, Mas sees more amiss than the detectives do, but his instinct is to keep his mouth shut. Only when the case threatens his daughter and her family does Mas take action: patiently, stubbornly tugging at the end of a tangled, dangerous mystery. And as he does, he begins to lay bare a tragic secret on the dark side of an American dream.…

Both a riveting mystery and a powerful story of passionate relationships across a cultural divide, Gasa-Gasa Girl is a tale told with heart and wisdom: an unforgettable portrait of fathers, daughters, and other strangers.

"[Hirahara] brings heart and elegance to a nifty whodunit.... In the process of solving a murder mystery, an elderly Japanese-American begins to rebuild the strained relationship with his only daughter."—Kirkus Reviews

”What makes this series unique is its flawed and honorable protagonist. … A fascinating insight into a complex and admirable man.”—Booklist, starred review

“The endearing, quietly dignified Mas, supported by a cast of spirited New Yorkers, as well as the distinctive Japanese-flavored prose, make this a memorable read.”—Publishers Weekly

Naomi Hirahara is a freelance writer and journalist who served for several years as an editor of The Rafu Shimpo, the largest Japanese American daily newspaper. She is the author of two previous Mas Arai mysteries, Gasa-Gasa Girl and Summer of the Big Bachi, named one of "The Ten Best Mysteries and Thrillers of 2004" by the Chicago Tribune and a Publishers Weekly "Best Books of 2004" pick.
Loading...
or
Not Currently Available for Direct Purchase