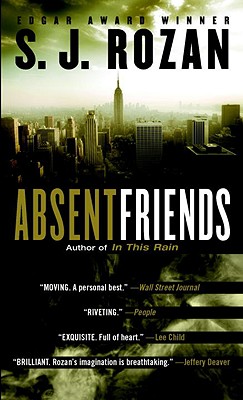 Jimmy. Markie. Vicky. Sally. Tom. Jack. Marian. Their friendships are strong, and their futures bright—until one shattering night that changes everything. Two of the friends will die young. The others will be left to pick up the pieces in the shadow of a past that still echoes with hopes and regrets. And one—Jimmy, a firefighter—will die a hero twenty years later when the Twin Towers fall. But it is the suicide of a reporter and a colleague’s search for answers in the aftermath of a horrifying tragedy that will finally penetrate their silence. . . . For as the story of that night begins to unwind, a tangle of secret relationships and personal demons is exposed—until the truth erupts with stunning force.

"Many years from now when your children ask what New York City was like just after 9/11, this will be the book you give them in response. It's an exquisite novel full of heart, soul, passion and intelligence, and it's the one this great New York author was born to write." —Lee Child

"The best contemporary novels create context for shared experiences that somehow remain unfathomable. Full of surprises from page one, Absent Friends is one of those—S.J. Rozan has written an ambitious, solemn, and ultimately hopeful book that shouldn't be missed." —Stephen White

"S.J. Rozan is, hands-down, one of my favorite crime writers working today. To read her is to experience the kind of pure pleasure that only a master can deliver."—Dennis Lehane

"Rozan has you looking over your shoulder into the dark."—Michael Connelly

"S.J. Rozan has written the most consistently compelling series of traditional detective novels published in this decade. Now is the time to discover what Rozan's loyal readership has known all along." —George Pelecanos

"Okay, listen up: This woman can write!"—Robert Crais

"Rozan is a wonderful and insightful writer, and she creates an intricate, intimate portrait of a group of 40-something New Yorkers coping with a city in ruins."—Publishers Weekly, starred review

"Absent Friends is a meditation on love, loss and enduring friendships as filtered through the shattering aftermath of 9/11. ... Without question one of the year's standout novels."—Baltimore Sun

"Absent Friends is a look at the nature of heroes, friendship, truth and self-knowledge..... The final chapter is richly heartbreaking and awe-inspiring."—Fort Lauderdale Sun-Sentinel

"Rozan, who has won all the crime-genre awards for her Bill Smith/Lydia Chin detective titles, breaks away from that series with a novel that could stand proudly beside those of the masters, Dennis Lehane and George Pelecanos."—New York Daily News

"The story revolves around four boys and three girls— their childhoods, myriad backgrounds and families—and the men and women they become.... Rozan delivers a rich, sophisticated view of New Yorkers whose lives, like so many others, were so vastly changed on that September morning."—Newport News Daily Press

"Add S.J. Rozan to the list of artists and writers addressing the legacy of 9/11. Her ambitious Absent Friends uses that event as the backdrop for a heartbreaking story about secrets, loyalty and our primal need for heroes."—Seattle Times

S. J. Rozan is the author of the acclaimed novel Absent Friends in addition to eight novels in the Edgar, Shamus, Nero, Macavity, and Anthony awards-winning Lydia Chin/Bill Smith series, including "Winter and Night," which won the Edgar, Nero, and Macavity awards for Best Novel, and was nominated for the Shamus, Anthony, and Barry awards. Born and raised in the Bronx, Rozan is an architect in a New York firm and lives in Greenwich Village, where she is at work on her next novel of suspense.
Loading...
or
Not Currently Available for Direct Purchase