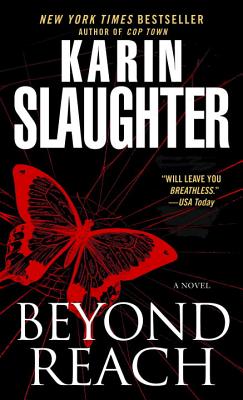 In a small Georgia town, Detective Lena Adams is accused of a vicious murder. A hundred miles away, Police Chief Jeffrey Tolliver learns that his young detective has been arrested. And Jeffrey's wife, pediatrician and medical examiner Sara Linton, fighting a heartbreaking malpractice suit, is thrust into the center of a bizarre and murderous case.

For Lena has fled to the place where she grew up, careening back through the shadows of her past. Now only Jeffrey and Sara can free Lena from the web of lies that has trapped her--as this powerful novel races toward its shattering climax and a final, unforgettable twist. Praise for Karin Slaughter and Beyond Reach "Will leave you breathless."--USA Today

"Slaughter writes with a razor."--The Plain Dealer "Slaughter will have you on the edge of your seat."--Seattle Post-Intelligencer

"Powerful and complex . . . Slaughter gradually unspools her fascinating story, all the way up to its shocking conclusion."--Chicago Sun-Times From the Hardcover edition.

Praise For Beyond Reach…

“Bone-chilling.... Expertly shifting back and forth in both time and point of view, Slaughter builds the suspense to a perfect crescendo.”—Publishers Weekly, starred

“Offers both wrenching emotional highs and lows and a gripping plot.... A shocker of an ending.”—Booklist

“Powerful and complex…Slaughter gradually unspools her fascinating story, all the way up to its shocking conclusion.” —Chicago Sun-Times

“Slaughter will have you on the edge of your seat.” —Seattle Post-Intelligencer

Karin Slaughter is the New York Times and #1 internationally bestselling author of numerous thrillers, including Cop Town, Unseen, Criminal, Fallen, Broken, Undone, Fractured, Beyond Reach, Triptych, Faithless, and the e-original short stories "Snatched" and "Busted." She is a native of Georgia. From the Hardcover edition.
Loading...
or
Not Currently Available for Direct Purchase