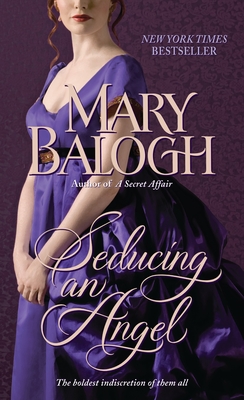 In a time unlike any other, a family you’ll never forget . . . Meet the Huxtables—three headstrong sisters and their dashing brother—each searching for love that’s always a shocking indiscretion away. . . . In her magnificent new novel, New York Times bestselling author Mary Balogh sweeps us into a world of scandal and intrigue—glittering Regency England—and introduces the youngest Huxtable: Stephen, the only son. Here Stephen will risk his reputation and his heart as he enters a scandalous liaison with the infamous beauty intent on seduction. But when passion turns the tables on them both, who can say who has seduced whom?

He must be wealthy, wellborn, and want her more than he wants any other woman. Those are the conditions that must be met by the man Cassandra Belmont chooses for her lover. Marriage is out of the question for the destitute widow who stands accused of murdering her husband and must now barter her beauty in order to survive. With seduction in mind, she sets her sights on Stephen Huxtable, the irresistibly attractive Earl of Merton and London’s most eligible bachelor. But Stephen’s first intriguing glimpse of the mysterious, alluring Lady Paget convinces him that he has found the ideal woman to share his bed. There is only one caveat. This relationship fueled by mutual pleasure must be on his terms.

As the two warily circle each other in a sensual dance of attack and retreat, a single night of passion alters all the rules. Cassandra, whose reputation is already in tatters, is now in danger of losing the one thing she vowed never to give. And Stephen, who wants Cassandra more than he has ever wanted any woman, won’t rest until she has surrendered everything—not as his mistress—but as his lover and wife. . . .

“Tender, sultry, and thoroughly satisfying.... Balogh has added another jewel to her collection.”—Library Journal, starred review

Mary Balogh is the New York Times bestselling author of the acclaimed Slightly novels: Slightly Married, Slightly Wicked, Slightly Scandalous, Slightly Tempted, Slightly Sinful, and Slightly Dangerous, as well as the romances No Man’s Mistress, More than a Mistress, and One Night for Love. She is also the author of Simply Love, Simply Unforgettable, Simply Magic, and Simply Perfect, her dazzling quartet of novels set at Miss Martin’s School for Girls. A former teacher herself, she grew up in Wales and now lives in Canada.
Loading...
or support indie stores by buying on
(This book is on backorder)