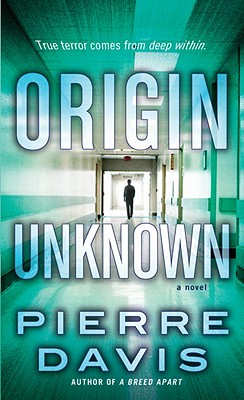 True terror comes from deep within.

Dr. Lydia South, a cutting-edge neuroscientist, has perfected a lucrative, top secret technology that can map secrets of the brain. But Lydia’s past is inextricably bound with that of a brilliant but deranged sociopath, a man with the ability to blend in anywhere around the world, sow seeds of destruction, and escape unscathed—and he’ll stop at nothing to remain anonymous.

It’s a dizzying case for the straight-shooting Lt. Elliot Elliot, aka E-Squared or Double E. As the former cop untangles the madman’s cleverly constructed web of false leads and dead ends, he’s drawn deep into the human mind—and even deeper into the mind of a monster. And the only hope for Elliot and Lydia escaping alive may rest in the unpredictable hands of an inexplicably gifted four-year old boy.


Praise For Origin Unknown: A Novel…

“[Pierre Davis] has a graceful, witty style, and his ability to render believable astonishingly improbable occurrences is the stuff of sorcery.”—The Dallas Morning News, on A Breed Apart

“An exciting suspense and medical mystery with fast-paced action and interesting characters, A Breed Apart is a fascinating thriller.”—Freshfiction.com, on A Breed Apart

“The author has a sure instinct for clarity and an absolute genius for metaphor. . . . Unremittingly inventive.”—Entertainment Weekly, on The Deus Machine

Pierre Davis (aka Pierre Ouellette) entered the creative realm at age thirteen as a lead guitarist for numerous bands in the Pacific Northwest, including the nationally known Paul Revere and the Raiders. He went on to play with such jazz luminaries as saxophonist Jim Pepper and bassist David Friesen, all the while composing soundtracks for short films and videos. To support his music habit, he became a freelance writer and eventually co-founded an advertising agency specializing in high technology, serving as its creative director. During this period, he wrote two novels that were eventually published in seven languages, both optioned for film. Davis currently lives in Portland, Oregon, where he devotes himself exclusively to writing fiction and playing jazz guitar in a little bar just down the street.
Loading...
or
Not Currently Available for Direct Purchase