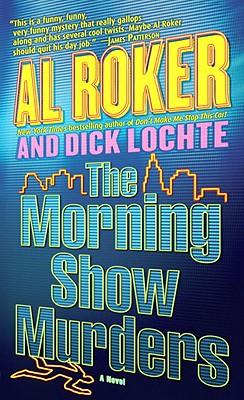 As famous for his popular cooking segment on Wake Up America! as for his swank Manhattan bistro, Billy Blessing can add prime murder suspect to his impressive list of accomplishments. Because when one of the network’s top honchos ends up dead, it’s a poisoned serving of Blessing’s coq au vin that’s to blame. Billy knows he’s being framed, but proving it won’t be easy—not with his perky cohost involved in a brass-knuckles contract negotiation, a Mossad agent about to tell all on the air, and a ruthless international assassin arriving in the Big Apple. Now Billy isn’t so much concerned about staying alive in the ratings . . . as just staying alive. For the closer Billy comes to uncovering an international conspiracy, the closer he comes to being canceled—permanently.

Praise For The Morning Show Murders: A Novel (Billy Blessing #1)…

“This is a funny, funny, very funny mystery that really gallops along and has several cool twists. Maybe Al Roker should quit his day job.”
—James Patterson

“Dazzling . . . If you like your crime with a brilliant plot, crackling dialogue, a dash of celebrity and plenty of suspense, then The Morning Show Murders is an absolute must-read.”
—Linda Fairstein


“Terrific plot, fast, funny, and full of action and adventure with even a touch of steamy romance.”—Janet Evanovich

“Great fun! Al pulls back the curtain to reveal what really goes on when the cameras go off.” —Harlan Coben

Al Roker is known to over thirty million viewers for his work on NBC’s Today show, a role that has earned him ten Emmy awards. He is the New York Times bestselling author of Don’t Make Me Stop This Car!: Adventures in Fatherhood. An accomplished cook, Roker also has two bestselling cookbooks to his credit. Al Roker lives in Manhattan with his wife, ABC News and 20/20 correspondent Deborah Roberts, and has two daughters and a son.

Dick Lochte is the author of many popular crime novels including the award-winning Sleeping Dog, named one of “the 100 Favorite Mysteries of the Century” by the Independent Mystery Booksellers Association. His crime fiction column ran for nearly a decade in the Los Angeles Times and earned him the 2003 Ellen Nehr Award for Excellence in Mystery Reviewing. He lives in Southern California.