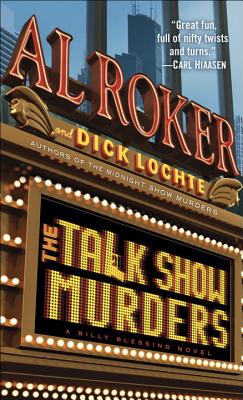 Al Roker returns with his most tantalizing mystery to date—as celebrity chef turned sleuth Billy Blessing finds his plate full of danger and secrets from his long-buried past threaten to make a comeback.

Before Billy Blessing was tapped to co-host the morning show Wake Up, America!, the celebrity chef lived a totally different life under a very different identity: as wily con man Billy Blanchard. Caught trying to run a scam on a shady Detroit businessman, Billy did time for his crimes, and has successfully kept that part of his past covered up ever since. But when Eddie Patton, a nosy ex-cop with a long memory, tries to blackmail him, Billy may have to pay up or to see the embarrassing truth blogcast to the world. And when Patton winds up dead, it’s just the first in a string of killings that has America’s most beloved TV host scrambling for clues and desperate to clear his name. Throw in a budding romance with a visiting movie star, and Billy Blessing may have finally gotten himself into one sticky situation even he can’t talk his way out of.

“Great fun! Al pulls back the curtain to reveal what really goes on when the cameras go off.”—Harlan Coben

“An engaging performance . . . The Talk Show Murders has all the charm and depth of a network morning show. The characters are pithy and colorful.”—Mystery Scene

“As well-paced and thoughtfully prepared as an Alice Waters tasting menu.”—Kirkus Reviews

“For fans old and new, The Talk Show Murders is a book not to pass up.”—The Philadelphia Tribune


Praise For The Talk Show Murders: A Billy Blessing Novel…

“Roker and Lochte offer a satisfying entrée to follow the appetizer they provided in The Morning Show Murders.”—Kirkus Reviews

“This is a funny, funny, very funny mystery that really gallops along and has several cool twists.”—James Patterson

“Dazzling . . . If you like your crime with a brilliant plot, crackling dialogue, a dash of celebrity and plenty of suspense, then The Morning Show Murders is an absolute must-read.”—Linda Fairstein

“Roker brings his A-game to the table when it comes to giving readers a birds-eye view into the behind-the-scenes action on a television show.”—Chicago Sun-Times

Al Roker is known to more than thirty million viewers for his work on NBC’s Today show, a role that has earned him ten Emmy awards. He is the New York Times bestselling author of Don’t Make Me Stop This Car!: Adventures in Fatherhood and co-author (with Dick Lochte) of the Billy Blessing novels, The Morning Show Murders and The Midnight Show Murders. An accomplished cook, Roker also has two cookbooks to his credit. Al Roker lives in Manhattan with his wife, ABC News and 20/20 correspondent Deborah Roberts, and has two daughters and a son.

Dick Lochte is the author of many popular crime novels, including the award-winning Sleeping Dog, named one of “the 100 Favorite Mysteries of the Century” by the Independent Mystery Booksellers Association. His crime fiction column ran for nearly a decade in the Los Angeles Times and earned him the 2003 Ellen Nehr Award for Excellence in Mystery Reviewing. He lives in Southern California.