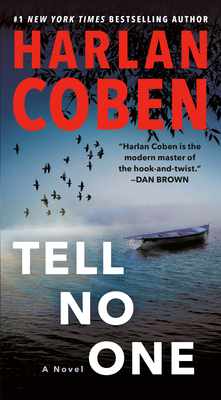 “Harlan Coben's Tell No One begins at a run and in no time is moving at an all-out sprint. . . . The characters are engaging and the strange goings-on will leave readers rapidly turning pages in search of fresh clues. . . . [Coben] writes with wit and a shrewd sense of plotting.”—San Francisco Chronicle

“Fifteen pages into this book, you're sucked in and Coben never lets the pace stall. . . . If it takes more than two days to finish this one, you're working too many hours. A hot summer rush.”—Detroit News

“Compelling, cinematic  . . . with surprises in store for the reader until the very last page . . . [readers will] savor every clue, every detail.”—USA Today

“Coben knows how to move pages, and he generates considerable suspense.”—Publishers Weekly

"A gloriously exciting yarn . . . A quest for answers that will have you burning the midnight oil till 3:00 a.m."—Kirkus Reviews

“Tell No One is such a terrific thriller, you'll want to tell everyone! Harlan Coben delivers the near-impossible — a can't-put-it-down page-turner with a slam-bang surprise ending. You'll read this book in one breathless gulp!”—Lisa Scottoline, New York Times bestselling author of Moment of Truth

“Suspense at its finest.”—Jeffery Deaver

“A thriller of runaway tension.”—Iris Johansen

With more than seventy million books in print worldwide, Harlan Coben is the #1 New York Times bestselling author of more than thirty novels, including the Myron Bolitar series and a series aimed at young adults featuring Myron's nephew, Mickey Bolitar. His books are published in forty-three languages around the globe and have been number one bestsellers in more than a dozen countries. The winner of the Edgar, Shamus, and Anthony Awards, he lives in New Jersey.
Loading...
or support indie stores by buying on