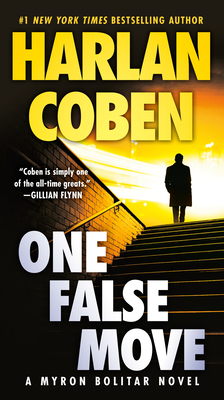 It’s no secret that Harlan Coben’s name is synonymous with unrelenting suspense. In this compelling fifth novel in his acclaimed Myron Bolitar series, the unforgettable sports agent agrees to protect basketball star Brenda Slaughter while trying to unravel the tragic riddle of her life.

As a big-time New York sports agent, Myron has a professional interest in Brenda. Then a personal one. But between them isn’t just the difference in their backgrounds or the color of their skin. Between them is a chasm of corruption and lies, a vicious young mafioso on the make, and one secret that some people are dying to keep–and others are killing to protect.

Praise For One False Move: A Myron Bolitar Novel…

"A slam dunk ... You race to turn the pages ... both suspenseful and often surprisingly funny."—People

"Fast-paced ... layered with both tenderness and fun ... Coben [is] a gifted storyteller."—Denver Post

“Myron Bolitar is one of the most engaging heroes in mystery fiction. One False Move is a blast from start to finish.”—Dennis Lehane