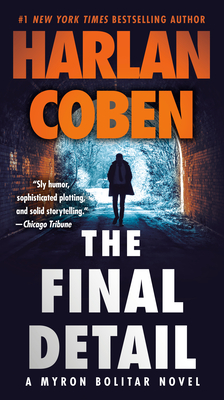 Myron Bolitar’s colleague at MB SportsReps, Esperanza, has been arrested for the murder of a client, a fallen baseball star attempting a comeback. Myron is determined to prove Esperanza’s innocence—even if she won’t speak to him on the advice of her lawyer, who warns Myron to keep away from both the case and his client. But Myron is already too close, too involved, and has too much at stake. And the closer Myron gets to the truth, the more the evidence points to the only viable suspect besides Esperanza: Myron himself.

Praise For The Final Detail: A Myron Bolitar Novel…

Harlan Coben is the winner of the Edgar, Shamus, and Anthony awards. His critically acclaimed novels have been published in forty-one languages around the world and have been number one bestsellers in more than half a dozen countries. In addition to the Myron Bolitar series (Deal Breaker, Drop Shot, Fade Away, Back Spin, One False Move, The Final Detail, Darkest Fear, Promise Me, Long Lost, andLive Wire), Coben is also the author of the young adult Mickey Bolitar series including Shelter and Seconds Away, and of Miracle Cure, Play Dead, Tell No One, Gone for Good, No Second Chance, Just One Look, The Innocent, The Woods, Hold Tight, Caught, and Stay Close.
Loading...
or support indie stores by buying on