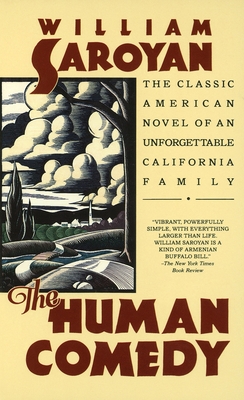 The place is Ithaca, in California's San Joaquin Valley. The time is World War II. The family is the Macauley's—a mother, sister, and three brothers whose struggles and dreams reflect those of America's second-generation immigrants. . . . In particular, fourteen-year-old Homer, determined to become one of the fastest telegraph messengers in the West, finds himself caught between reality and illusion as delivering his messages of wartime death, love, and money brings him face-to-face with human emotion at its most naked and raw.

Gentle, poignant and richly autobiographical, this delightful novel shows us the boy becoming the man in a world that even in the midst of war, appears sweeter, safer and more livable than out own.

William Saroyan was one of America’s major twentieth century writers. In his prize-winning play, “The Time of Your life,” and in his celebrated fictional works such as “The Daring Young Man on the Flying Trapeze,” he displayed a fantastical imagination and irresistible charm that is still fresh and entertaining today.
Loading...
or support indie stores by buying on