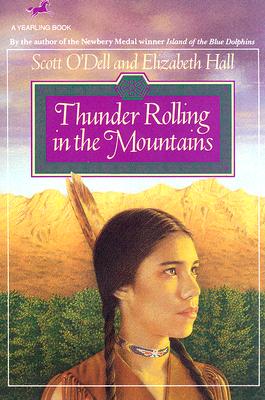 Thunder Rolling in the Mountains

It is spring of 1877 when fourteen-year-old Sound of Running Feet, daughter of Chief Joseph of the Nez Perce, sees white people panning gold in the little creek that feeds the Wallowa River, and brings word of them to her father.

"They are the first, but more are on the way," he says. "We are few and they are many. They will devour us."

It is Sound of Running Feet who narrates the story of her tribe's fate. Readers will be gripped as she shares with us her respect for her father, her love for handsome Swan Necklace, and her destiny.

Scott O'Dell was born in Los Angeles, California, on May 23, 1898. He attended Occidental College, University of Wisconsin-Madison, Stanford University, and University of Rome. He worked as a technical director for Paramount, a cameraman for Metro-Goldwyn-Mayer, and a book editor of a Los Angeles newspaper before serving in the United States Air Force during World War II. The recipient of numerous book awards, he established the Scott O'Dell award for historical fiction in 1981. He died on October 15, 1989. "From the Paperback edition."
Loading...
or
Not Currently Available for Direct Purchase