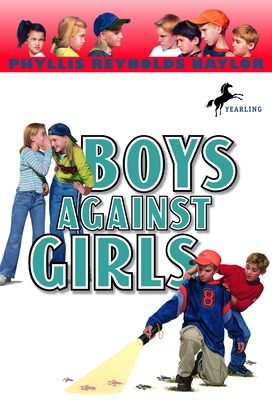 The Hatford-Malloy feud continues in this fast-paced sequel to The Boys Start the War and The Girls Get Even (both Delacorte, 1993). Their egos still smarting from the humiliation they suffered on Halloween at the hands of their female neighbors, the Hatford boys try to frighten them with tales of the abaguchie, a creature of local legend. A funny series of plans for revenge and retaliation from both sides follows. Ultimately, the children call a truce when they are united by a common cause-sharing a joke at their parents' expense. Although this title sums up the background of the story clearly, it relies on the earlier books for characterization. The girls come across as stereotypes-an athlete, a bookworm, and an aspiring actress-and the boys are virtually indistinguishable from one another. Nevertheless, fans of the previous books will enjoy this installment.

Phyllis Reynolds Naylor knew at a very early age that she wanted to be a writer. She began her career writing short stories for magazines and has since authored more than ninety books for children. Though Mrs. Naylor grew up in Ohio, she sets many of her books in West Virginia. The boys-girls battle series is set in Buckman, West Virginia, a town modeled after Buckhannon, West Virginia, where her husband spent most of his growing-up years. Mrs. Naylor has enjoyed accolades from young readers all across the country, and she has won numerous awards. She was honored with the Newbery Medal for her novel Shiloh.

Inspirations for writing
Absolutely everything that ever happened to me and anybody else, all mixed up with imaginings!
Loading...
or
Not Currently Available for Direct Purchase