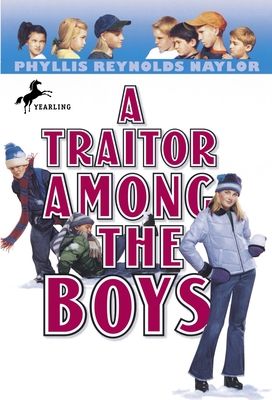 A Traitor Among the Boys (Boy/Girl Battle #5)

The Hatford boys' New Year's resolution is "the girls can stay . . . but only if they play by our rules." Their mother insists that they "treat those girls as though they were your sisters." Okay, but somehow the boys' interpretation owes more to sibling rivalry than to brotherly love. The one weak link is young Peter, who doesn't understand the rivalry, openly likes the girls, and sees nothing wrong with sitting in their kitchen eating homemade cookies and answering questions about his brothers' plans. Readers will find themselves laughing out loud at the pranks, the conversations, and one unforgettably embarrassing moment. The high-flying humor is juxtaposed with the budding affection between Josh and Beth and the way all the children pull together during a blizzard. The fifth entry in Naylor's refreshing series chronicling the feud between the Hatfords and the Malloys.

Praise For A Traitor Among the Boys (Boy/Girl Battle #5)…

"The high-flying humor is juxtaposed with . . . the way the children pull together during a blizzard." -- Booklist

Phyllis Reynolds Naylor knew at a very early age that she wanted to be a writer. She began her career writing short stories for magazines and has since authored more than ninety books for children. Though Mrs. Naylor grew up in Ohio, she sets many of her books in West Virginia. The boys-girls battle series is set in Buckman, West Virginia, a town modeled after Buckhannon, West Virginia, where her husband spent most of his growing-up years. Mrs. Naylor has enjoyed accolades from young readers all across the country, and she has won numerous awards. She was honored with the Newbery Medal for her novel Shiloh.

Inspirations for writing
Absolutely everything that ever happened to me and anybody else, all mixed up with imaginings!
Loading...
or
Not Currently Available for Direct Purchase