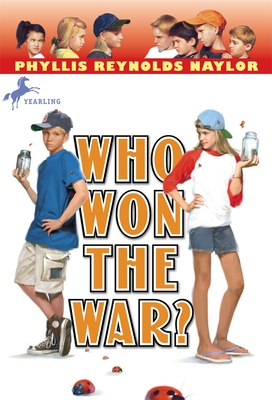 Who will win as the curtain closes on the war between the girls and the boys?
Summer vacation is almost over and after one year in Buckman it looks like the Malloy girls will be going home to Ohio. The Hatford boys are relieved to finally be rid of Eddie, Beth and Caroline, also known as the Womper, the Weirdo and the Crazy.

As the clock ticks away at their final days, Jake and Eddie keep up the competing, tricking and scheming until Eddie puts Jake up to the biggest dare of the year. She wants to prove once and for all that the girls are in charge. Jake can't back away and let the girls declare victory. The wacky war that began the day the girls arrived isn't over yet!

“The characters are well developed through their dialogue, actions, and relationships with one another. Fans of the earlier books will want to read this engaging novel to decide for themselves who really won the war.”
—School Library Journal

Phyllis Reynolds Naylor has written over a hundred books, many taking place in West Virginia. The author lives in Bethesda, MD.
Loading...
or
Not Currently Available for Direct Purchase