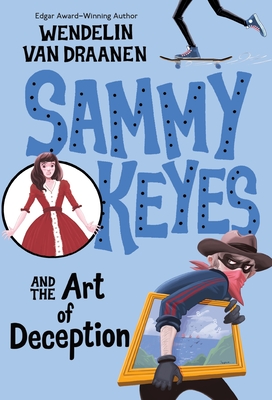 Sammy Keyes and the Art of Deception

“The hottest sleuth to appear in children’s books since Nancy Drew” (The Boston Globe) is back! Don’t miss the eighth book in the series that’s been described as “a combination of Carl Hiaasen’s Flush and Janet Evanovich’s Stephanie Plum books” (School Library Journal) and hailed as “nonstop whodunits” (Kirkus Reviews)!

The artsy crowd thinks Sammy Keyes has a lot of nerve showing up at a fancy reception in high-tops. But when she tackles a robber who’s brandishing a gun with one hand and pulling paintings from the wall with the other, they’re glad she has nerve. Or are they?

Sammy may have stopped one criminal, but the real crime at this show has yet to be discovered. The real crime is more subtle, more artful, than anything Sammy’s ever seen. Who knew art could be so dangerous?


“The sleuth delights from start to finish. Keep your binoculars trained on Sammy Keyes.” —Publishers Weekly

Praise For Sammy Keyes and the Art of Deception…