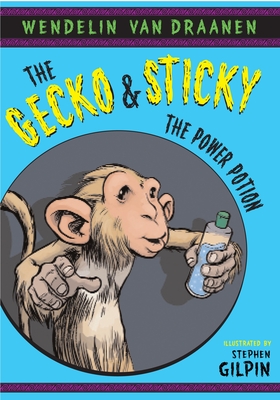 The Gecko and Sticky

The Gecko & Sticky are a fabulous crime-fighting duo! This quartet of funny adventures will appeal to fans of superheroes both young and old, and would make terrific all-family read-alouds.


Dave Sanchez, crime-fighting courier, has just been handed the scariest package he's ever seen, and it's addressed to none other than the dastardly Damien Black! Dave is well award that he should deliver the package, but when he sees the evil-looking potion inside, he knows he can't. So he comes up with a totally clever ruse to trick the villain and . . . it backfires. Big-time. Soon he's facing off with six-horned goats, terrifying tarantulas, a java-junkie monkey--and, of course, Damien Black!

1. The Villain's Lair,
2. The Greatest Power,
3. Sinsister Substitute, and
4. The Power Potion.


Praise For The Gecko and Sticky: The Power Potion…

Praise for the Gecko & Sticky books:

"Fearsome is rarely this much fun. Van Draanen has a super imagination, to which she never applies the brakes. Readers who enjoy loony adventures will love this ride." -- Children's Literature

"Consistently entertaining . . . reaching a frenetic level of energy and comedy as the story's tension builds." -- Booklist

"Peppered with exaggerated alliteration and the excitable lizard's Spanish-tinged 'Stickynese,' the wisecracking narrative bounds from one slapstick scenario to another." -- Publishers Weekly

WENDELIN VAN DRAANEN spent many years as a teacher before devoting herself to writing full-time. She loves reading, running, writing, and rock 'n roll!

Her books for younger readers include The Gecko & Sticky quartet and The Shredderman quartet. For middle graders check out the Sammy Keyes mysteries and Swear to Howdy.  For tweens and teens, look for Flipped, The Running Dream, Confessions of a Serial Kisser, and Runaway.

Stephen Gilpin developed a taste for drawing strange things at an early age and hasn't looked back since. He graduated with honors from New York City's School of Visual Arts, where he had studied painting and cartooning. He currently lives in Kansas with his wife and their four children.