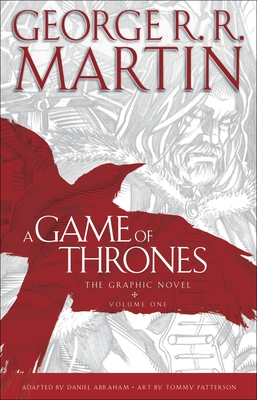 A Game of Thrones (Hardcover)

The Graphic Novel: Volume One

This graphic novel adaptation contains more than fifty pages of exclusive content not available in the original comic books, including

• a new Preface by George R. R. Martin
• early renderings of key scenes and favorite characters from the novels
• a walk-through of the entire creative process, from auditioning the artists to tweaking the scripts to coloring the final pages
• behind-the-scenes commentary from Daniel Abraham, Tommy Patterson, and series editor Anne Groell

You’ve read the books. You’ve watched the hit series on HBO. Now acclaimed novelist Daniel Abraham and illustrator Tommy Patterson bring George R. R. Martin’s epic fantasy masterwork A Game of Thrones to majestic new life in the pages of this full-color graphic novel. Comprised of the initial six issues of the graphic series, this is the first volume in what is sure to be one of the most coveted collaborations of the year.

George R. R. Martin is the #1 New York Times bestselling author of many novels, including the acclaimed series A Song of Ice and Fire—A Game of Thrones, A Clash of Kings, A Storm of Swords, A Feast for Crows, and A Dance with Dragons. As a writer-producer, he has worked on The Twilight Zone, Beauty and the Beast, and various feature films and pilots that were never made. He lives with the lovely Parris in Santa Fe, New Mexico.

Daniel Abraham has been nominated for the Hugo, the Nebula, and the World Fantasy awards, and won the International Horror Guild Award. He has written the graphic novel adaptations of George R. R. Martin’s Fevre Dream and “Skin Trade,” as well as original scripts for Wild Cards: The Hard Call.

Tommy Patterson’s illustrator credits include Farscape for Boom! Studios, the movie adaptation The Warriors for Dynamite Entertainment, and Tales from Wonderland: The White Night, Red Rose, and Stingers for Zenescope Entertainment.