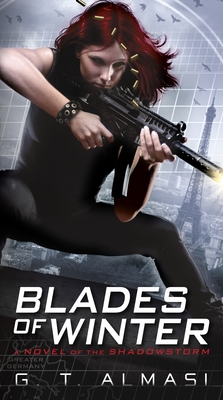 A Novel of the Shadowstorm

In one of the most exciting debuts in years, G. T. Almasi has fused the intricate cat-and-mouse games of a John le Carré novel with the brash style of comic book superheroes to create a kick-ass alternate history that reimagines the Cold War as a clash of spies with biological, chemical, and technological enhancements.

Nineteen-year-old Alix Nico, a self-described “million-dollar murder machine,” is a rising star in ExOps, a covert-action agency that aggressively shields the United States from its three great enemies: the Soviet Union, Greater Germany, and the Nationalist Republic of China. Rather than risk another all-out war, the four superpowers have poured their resources into creating superspies known as Levels.

Alix is one of the hottest young American Levels. That’s no surprise: Her dad was America’s top Level before he was captured and killed eight years ago. But when an impulsive decision explodes—literally—in her face, Alix uncovers a conspiracy that pushes her to her limits and could upset the global balance of power forever.

Look for all of G. T. Almasi’s riveting Shadowstorm novels:
BLADES OF WINTER | HAMMER OF ANGELS | TALON OF SCORPIO

G. T. Almasi graduated from RISD and moved to Boston to pursue a career as a graphic designer. While he built his design portfolio, he joined a band as the bass player, and wrote and designed the band’s newsletter. Once his career as an art director took off, he continued to supplement his design talents by writing copy for his clients. As a novelist, his literary influences include Robert Ludlum, Neal Stephenson, and Hunter S. Thompson. He also draws inspiration from John Woo’s movies and Todd Howard’s videogames. Almasi lives in Plymouth, Massachusetts, with his wife, Natalie, and their lovably stubborn dog, Ella.
or
Not Currently Available for Direct Purchase
Copyright © 2020 American Booksellers Association