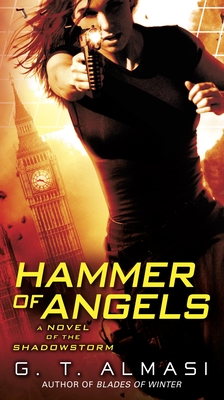 In G. T. Almasi’s thrilling alternate reality, the United States, the USSR, and the Republic of China share a fragile balance of power with Greater Germany, which emerged from World War II in control of Europe and half of the Middle East. To avoid nuclear Armageddon, the four superpowers pursue their ambitions with elite spies known as Levels, who are modified with mechanical and chemical enhancements.

Nineteen-year-old Alix Nico, code-named Scarlet, is a kick-ass superheroine with killer Mods and an attitude to match. She’s considered one of America’s top Levels, even though her last mission nearly precipitated World War III. So now Scarlet and her new partner, Darwin, have been sent to Greater Germany to help sow the seeds of anarchy and prevent Germany’s defection to Russia and China.

But where Scarlet goes, chaos follows—and when her mission takes an unexpected turn, she and Darwin must go ever deeper into enemy territory. As Scarlet grapples with a troubling attraction to her new partner, explosive information comes to light about the German cloning program and one of its prisoners—a legendary American Level who just happens to be Scarlet’s father.

“Action-packed . . . Hammer of Angels has all the elements of a perfect spy novel.”—All Things Urban Fantasy

Look for all of G. T. Almasi’s riveting Shadowstorm novels:
BLADES OF WINTER | HAMMER OF ANGELS | TALON OF SCORPIO


Praise For Hammer of Angels: A Novel of Shadowstorm…

“Action-packed . . . Hammer of Angels has all the elements of a perfect spy novel.”—All Things Urban Fantasy

G. T. Almasi graduated from RISD and moved to Boston to pursue a career as a graphic designer. While he built his design portfolio, he joined a band as the bass player, and wrote and designed the band’s newsletter. Once his career as an art director took off, he continued to supplement his design talents by writing copy for his clients. As a novelist, his literary influences include Robert Ludlum, Neal Stephenson, and Hunter S. Thompson. He also draws inspiration from John Woo’s movies and Todd Howard’s videogames. Almasi lives in Plymouth, Massachusetts, with his wife, Natalie, and their lovably stubborn dog, Ella.
Loading...
or
Not Currently Available for Direct Purchase