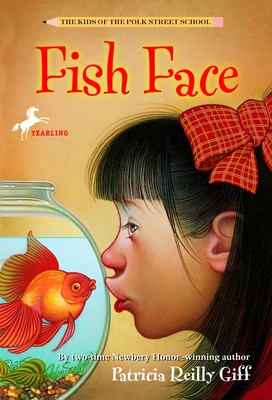 Fish Face (The Kids of the Polk Street School #2)

Emily Arrow may be a poor reader, but she's terrific in math and is also the fastest runner in her class. In October school gets even better when a newcomer from Florida, Dawn Tiffanie Bosco, joins the class and sits next to her.

When Emily sees that Dawn's a better reader and a faster runner, she tries to accept it with grace. Emily is still sure it will be fun to have a new friend to show her"fish face" to and share secrets with.

But then Emily discovers something awful--Dawn's a thief! And to make matters worse, no one will believe Emily.

Patricia Reilly Giff has recieved the Newbery Honor for Pictures of Hollis Woods and Lily’s Crossing, which is also a Boston Globe–Horn Book Honor Book. Nory Ryan’s Song was named an ALA Best Book for Young Adults and an ALA Notable Book.

Blanche Sims is a children’s book illustrator, born in Cleveland, Ohio. She has illustrated dozens of books, as well as the television film Beyond the Butterfly, which won a Parents’ Choice Foundation commendation for television in 2000.
Loading...
or support indie stores by buying on