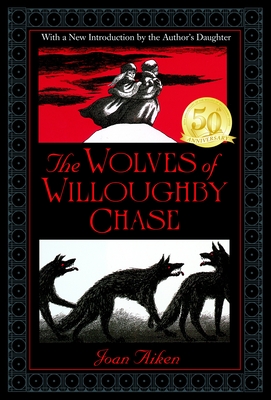 Wicked wolves and a grim governess threaten Bonnie and her cousin Sylvia when Bonnie's parents leave Willoughby Chase for a sea voyage. Left in the care of the cruel Miss Slighcarp, the girls can hardly believe what is happening to their once happy home. The servants are dismissed, the furniture is sold, and Bonnie and Sylvia are sent to a prison-like orphan school. It seems as if the endless hours of drudgery will never cease.

With the help of Simon the gooseboy and his flock, they escape. But how will they ever get Willoughby Chase free from the clutches of the evil Miss Slighcarp?

This edition of the beloved classic features an introduction by Aiken's daughter, Lizza, providing insight into the struggles Aiken—much like her heroines—had to endure before finally finishing this classic story a decade after she started writing it.


Praise For The Wolves of Willoughby Chase (Wolves Chronicles Series #1)…

"A masterpiece...a copybook lesson in those virtues that a classic children's book must possess."--Time.

JOAN AIKEN was born in Sussex in 1924. She wrote over a hundred books for young readers and adults and is recognized as one of the classic authors of the 20 century. Her best-known books are those in the James III saga, of which the Lewis Carroll prize-winning The Wolves of Willoughby Chase was the first title. Throughout her lifetime she received the Edgar Allan Poe Award in the United States, the Guardian Award for Fiction for The Whispering Mountain, and was named a Member of the Order of the British Empire by Queen Elizabeth II in 1999 for her services to children's books. She died in 2004.
Loading...
or support indie stores by buying on