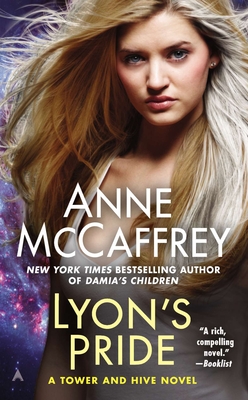 The Hive acts as a single entity, relentlessly swarming the galaxy, endlessly propagating on every habitable world they encounter—destroying native populations in the process. They do not recognize any sentience but their own. They do not acknowledge any attempt to communicate with them. They do not understand they leave countless numbers of dead in their wake.

The Prime Talents of the Raven-Lyon clan—telepaths, teleporters, and telekinetics—have protected the Alliance from the Hive breeding contagion for years. Now a fleet orbits the alien homeworld to prevent them from leaving, and a Hive queen and her eggs are in captivity and quarantined. And unless the Raven-Lyons break the language barrier between Human and Hive, the Alliance may have no choice but to eliminate their entire race…

“McCaffrey’s protagonists remain as warm and appealing as ever.”

“McCaffrey continues to spin a good tale…all in all, a rich, compelling novel.”

“Another exciting episode in the thrilling epic of The Rowan…Read and enjoy!”

Anne McCaffrey was the multi-award winning bestselling author of more than fifty books, including the Dragonriders of Pern series, the Freedom series, and the Tower and the Hive series.
Loading...
or support indie stores by buying on
(This book is on backorder)