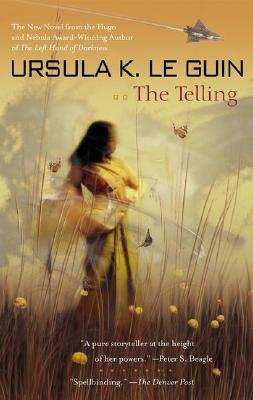 Once a culturally rich world, the planet Aka has been utterly transformed by technology. Records of the past have been destroyed, and citizens are strictly monitored. But an official observer from Earth named Sutty has learned of a group of outcasts who live in the wilderness. They still believe in the ancient ways and still practice its lost religion—the Telling. Intrigued by their beliefs, Sutty joins them on a sacred pilgrimage into the mountains…and into the dangerous terrain of her own heart, mind, and soul.


Praise For The Telling…

“The Telling will make you anticipate tomorrow a bit differently than you did yesterday.” —Denver Rocky Mountain News
“Powerfully moving…This is humanist SF at its best, LeGuin in top form.” —Faren Miller, Locus

“Her language, which sings true in every line, is simple and profound, and her storytelling is sure.” —Los Angeles Times

“I was enthralled.” —St. Louis Post-Dispatch
“In The Telling, the long overdue continuation of her classic Hainish cycle, Ursula K. Le Guin combines the gifts of a pure storyteller at the height of her powers with a wise and passionate heart and the disciplined, ceaselessly questioning mind of a true philosopher… In her Hainish books she is creating a social anthropology of the future, fascinating and utterly believable.” —Peter S. Beagle, author of The Last Unicorn

Ursula K. Le Guin was born in Berkeley, California, in 1929. Her novels include Rocannon's World, Planet of Exile, City of Illusions, and The Left Hand of Darkness. With the awarding of the 1975 Hugo and Nebula Awards to The Dispossessed, she became the first author to win both awards twice for novels. Le Guin lives in Portland, Oregon.
Loading...
or
Not Currently Available for Direct Purchase