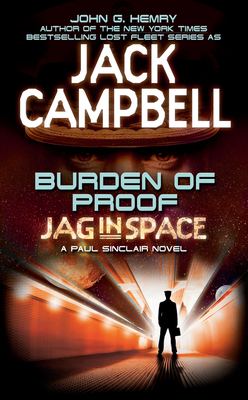 In John G. Hemry's terrific military science fiction series, a young officer risks everything in his fight for justice . . .

Lieutenant Junior Grade Paul Sinclair must adjust to his new position on the warship USS Michaelson--juggling his Legal Officer responsibilities and his personal life, as his relationship with girlfriend Jen Shen intensifies.

When an explosion takes out most of Forward Engineering, Sinclair leads the effort to extinguish the fire. He's practically a hero. But when Captain Shen, Jen’s father, is brought in to conduct an investigation, it seems that he’s gunning for his daughter’s suitor. Soon Sinclair uncovers evidence that points to a cover-up—involving a rising star in the officer corps. His evidence is circumstantial, and the suspect is the son of a powerful vice admiral. Sinclair is determined to see justice done, but is he willing to risk his name, his career, and his future among the stars?


Praise For Burden of Proof (A Paul Sinclair Novel #2)…

Praise for Burden of Proof

"A rock-solid courtroom drama . . . Hemry builds the story's suspense expertly . . . This one will keep you turning the pages with the proverbial bated breath." --SF Reviews

"Perfectly capturing the rapid-fire give-and-take and dramatic arguments of shows like Law & Order . . . and throwing in the solid characterization of classic Robert A. Heinlein, the story moves at a fast pace . . . A must for any military-SF fan." --SF Site

John G. Hemry is a retired naval officer who graduated from the U.S. Naval Academy in Annapolis before serving with the surface fleet and in a variety of other assignments. He is the author of the Paul Sinclair series and the Stark’s War series. As Jack Campbell, he is the New York Times bestselling author of The Lost Fleet series, The Lost Stars series, and Pillars of Reality series. He lives with his indomitable wife and three children in Maryland.
Loading...
or
Not Currently Available for Direct Purchase