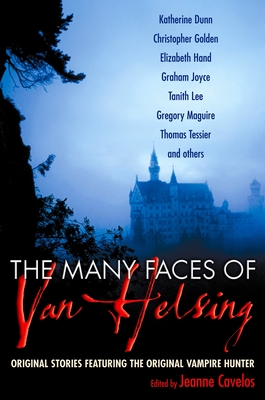 The Many Faces of Van Helsing

First introduced in Bram Stoker’s Dracula, Van Helsing was the ultimate adversary for the vampire—as complex as the fiend he relentlessly pursued. In this anthology, masters of horror and fantasy give Van Helsing his due as they reimagine the history and adventures of the original vampire hunter—the greatest foe of the most evil icon in literary history.

Jeanne Cavelos began her professional life as an astrophysicist, working in the Astronaut Training Division at NASA’s Johnson Space Center. Her love of science fiction sent her into a career in publishing. She became a senior editor at Dell Publishing, where she ran the science fiction/fantasy program and created the Abyss horror line, for which she won the World Fantasy Award. Jeanne has since left New York to pursue her own writing career. She is the author of The Science of Star Wars, The Science of The X-Files, and the Babylon 5 novel The Shadow Within. Jeanne is also the director of Odyssey, an annual summer workshop for writers of fantasy, science fiction, and horror.
Loading...
or
Not Currently Available for Direct Purchase