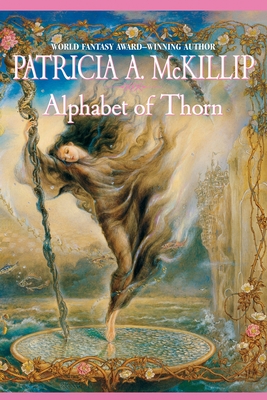 Fantasy author Patricia A. McKillip, the 21st century's response to Hans Christian Andersen, has mastered the art of writing fairy tales -- as evidenced by previous works like The Tower at Stony Wood, Ombria in Shadow, and In the Forests of Serre. Alphabet of Thorn is yet another timeless fable suitable for children and adults alike.

In the kingdom of Raine, a vast realm at the edge of the world, an orphaned baby girl is found by a palace librarian and raised to become a translator. Years later, the girl -- named Nepenthe -- comes in contact with a mysterious book written in a language of thorns that no one, not even the wizards at Raine's famous Floating School for mages, can decipher. The book calls out to Nepenthe's very soul, and she is soon privately translating its contents. As she works tirelessly transcribing the book -- which turns out to be about the historical figures of Axis, the Emperor of Night, and Kane, his masked sorcerer -- the kingdom of Raine is teetering on the brink of chaos. The newly crowned queen, a mousy 14-year old girl named Tessera who wants nothing to do with matters of state, hides in the woods as regents plot revolution. The queen's destiny, however, is intertwined with Nepenthe's ability to unravel the mystery of the thorns.

Patricia A. McKillip is a winner of the World Fantasy Award, and the author of many fantasy novels, including The Riddlemaster of Hed trilogy, Stepping from the Shadows, and The Cygnet and the Firebird. She lives in Oregon.
Loading...
or support indie stores by buying on