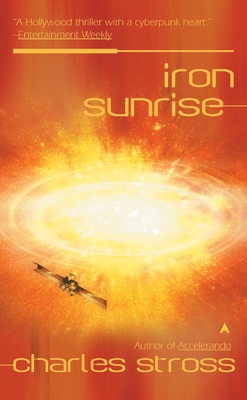 “[Stross] has the ability to superimpose an intriguing take on contemporary events over an imaginative story peopled by bizarre characters.” – The Kansas City Star

A G2 star doesn’t just explode—not without outside interference. So the survivors of the planet Moscow, which was annihilated in just such an event, have launched a counterattack against the most likely culprit: the neighboring system of New Dresden.

But New Dresden wasn’t responsible, and as the deadly missiles approach their target, Rachel Mansour, agent for the interests of Old Earth, is assigned to find out who was. Opposing her is an unknown—and unimaginable—enemy. At stake is not only the fate of New Dresden but also the very order of the universe.

And the one person who knows the identity of that enemy is a disaffected teenager who calls herself Wednesday Shadowmist. But Wednesday has no idea what she knows…

“[Stross] has the ability to superimpose an intriguing take on contemporary events over an imaginative story peopled by bizarre characters.” – The Kansas City Star

“Excellent use of language kept this novel in my saddlebags for immediate access…Worthy and sympathetic characters…taut plotting.” – The San Diego Union-Tribune

“A Hollywood thriller with a cyberpunk heart.” – Entertainment Weekly

Charles Stross was born in Leeds, England in 1964. He holds degrees in pharmacy and computer science, and has worked in a variety of jobs including pharmacist, technical author, software engineer, and freelance journalist. He is now a full-time writer.
Loading...
or support indie stores by buying on