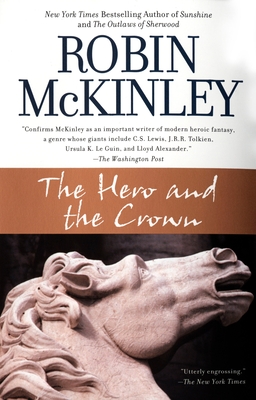 Discover the classic story that has captured hearts for decades...

Aerin could not remember a time when she had not known the story; she had grown up knowing it.

It was the story of her mother, the witchwoman who enspelled the king into marrying her, to get an heir that would rule Damar; and it was told that she turned her face to the wall and died of despair when she found she had borne a daughter instead of a son.
Aerin was that daughter.

But there was more of the story yet to be told; Aerin’s destiny was greater than even she had dreamed—for she was to be the true hero who would wield the power of the Blue Sword…

Praise For The Hero and the Crown…

“Refreshing…[McKinley] writes a sonorous, deliberately repetitive prose that, in its somber rhythms, evokes the sounds of Middle Earth as well as of ancient bards. It sustains the otherworldly atmosphere she painstakingly creates through the judicious use of arcane and invented words, restrained descriptions, and interior monologues…[She has] created an utterly engrossing fantasy.” –The New York Times

“I respect her writing and reread her constantly, finding new perception each time.” –Anne McCaffrey, bestselling author of The Dragonriders of Pern

“What Robin McKinley does to perfection in The Hero and the Crown is take some of the standard elements of fantasy and, with her uniquely personal vision, make them fresh and delightful again.” –The Christian Science Monitor

“Beautifully rendered…McKinley’s battle scenes are galvanizing and her romantic ones stirring.” –Booklist

“Robin McKinley’s Damar books are among the finest sword and sorcery being written today.” –Locus