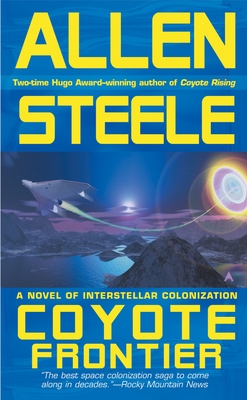 “The best space colonization saga to come along in decades.”—Rocky Mountain News

“A rich blend of personal and political storytelling.”—Entertainment Weekly

“With echoes of the work of Gordon Dickson and Clifford Simak, Steele offers myriad kinds of thrills.”—Science Fiction Weekly

“Allen Steele is at his best with this deep moral yet action-packed character driven science fiction thriller.”—Baryon

“Has an even more Heinleinish flavor than does either Coyote or Coyote Rising.”—Booklist

Allen Steele was a journalist who covered the space program. He later turned to fiction writing, and his first novel, Orbital Decay, published by Ace Books, was chosen as the best first novel of the year by Locus. Allen himself went on to be nominated for the John W. Campbell Award for Best New Writer. He began writing and selling to the science fiction magazines and is a three-time Hugo Award winner for his short fiction. In 2013, he received the Robert A. Heinlein Award for outstanding published works in science fiction.
Loading...
or support indie stores by buying on
(This book is on backorder)