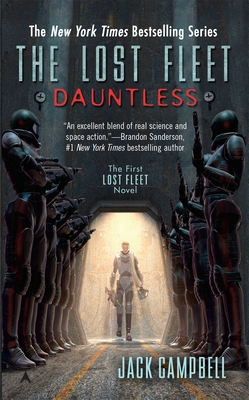 Dauntless (The Lost Fleet: Beyond the Frontier #1)

The Alliance has been fighting the Syndics for a century—and losing badly. Now its fleet is crippled and stranded in enemy territory. Their only hope is a man who's emerged from a century-long hibernation to find he has been heroically idealized beyond belief....

Captain John “Black Jack” Geary’s exploits are known to every schoolchild. Revered for his heroic “last stand” in the early days of the war, he was presumed dead. But a century later, Geary miraculously returns and reluctantly takes command of the Alliance Fleet as it faces annihilation by the Syndics.

Appalled by the hero-worship around him, Geary is nevertheless a man who will do his duty. And he knows that bringing the stolen Syndic hypernet key safely home is the Alliance’s one chance to win the war. But to do that, Geary will have to live up to the impossibly heroic “Black Jack” legend....

"DAUNTLESS is the best space navy book that I've ever read."—Michael Mammay, author of Planetside

“The Lost Fleet is some of the best military science fiction on the shelves today.”—SF Site

“Will grip the audience...Black Jack is a fascinating hero.”—Alternative Worlds

“Jack Campbell” is the pen name of John G. Hemry, a retired naval officer who graduated from the U.S. Naval Academy in Annapolis before serving with the surface fleet and in a variety of other assignments. He is the New York Times bestselling author of The Lost Fleet series and The Lost Stars series, as well as the Stark’s War, Paul Sinclair, and Pillars of Reality series. He lives with his indomitable wife and three children in Maryland.
Loading...
or
Not Currently Available for Direct Purchase