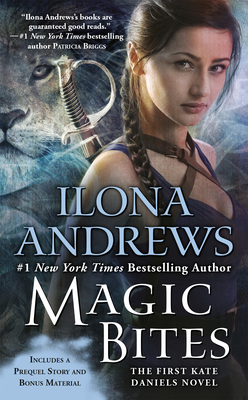 When the magic is up, rogue mages cast their spells and monsters appear, while guns refuse to fire and cars fail to start. But then technology returns, and the magic recedes as unpredictably as it arose, leaving all kinds of paranormal problems in its wake.

Kate Daniels is a down-on-her-luck mercenary who makes her living cleaning up these magical problems. But when Kate’s guardian is murdered, her quest for justice draws her into a power struggle between two strong factions within Atlanta’s magic circles.

The Masters of the Dead, necromancers who can control vampires, and the Pack, a paramilitary clan of shapechangers, blame each other for a series of bizarre killings—and the death of Kate’s guardian may be part of the same mystery. Pressured by both sides to find the killer, Kate realizes she’s way out of her league—but she wouldn’t have it any other way...

“Kate is a great kick-ass heroine.”—Locus

“One of the brightest voices in urban fantasy...Ilona Andrews delivers only the best.”—Jeaniene Frost, New York Times bestselling author

“One of the best urban fantasy series ever written!”—RT Book Reviews

“Urban fantasy absolutely does not get much better than this.”—SF Signal

“I can’t think of another series so consistent, so well written, so full of wit and action and drama that always manages to give me exactly what I’m needing.”—Fiction Vixen

Ilona Andrews is the pseudonym for a husband-and-wife writing team, Gordon and Ilona. They currently reside in Texas with their two children and numerous dogs and cats. The couple are the #1 New York Times and USA Today bestselling authors of the Kate Daniels and Kate Daniels World novels as well as The Edge and Hidden Legacy series. They also write the Innkeeper Chronicles series, which they post as a free weekly serial. For a complete list of their books, fun extras, and Innkeeper installments, please visit their website at www.ilona-andrews.com.
Loading...
or support indie stores by buying on