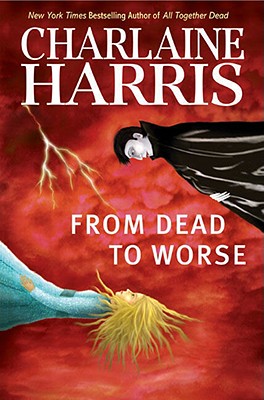 From Dead to Worse

New in the -addicting- New York Times bestselling series featuring Sookie Stackhouse.
After the natural disaster of Hurricane Katrina and the manmade explosion at the vampire summit, everyone--human and otherwise--is stressed, including Louisiana cocktail waitress Sookie Stackhouse, who is trying to cope with the fact that her boyfriend, Quinn, has gone missing.
It's clear that things are changing--whether the weres and vamps of her corner of Louisiana like it or not. And Sookie--Friend to the Pack and blood-bonded to Eric Northman, leader of the local vampire community--is caught up in the changes.
In the ensuing battles, Sookie faces danger, death, and once more, betrayal by someone she loves. And when the fur has finished flying and the cold blood finished flowing, her world will be forever altered.
And with HBO's launching of an all-new show, True Blood, based on the Southern Vampire novels, the demand for Charlaine Harris and Sookie Stackhouse is bigger than ever.
Watch a QuickTime trailer for the HBO original series True Blood.