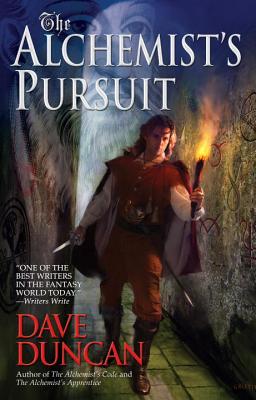 The Alchemist's Pursuit (An Alchemist Novel)

Hampered by arthritis, Nostradamus is in no mood for granting favors or running about looking for trouble. But when his apprentice Alfeo's mistress asks him to investigate the murder of her beloved courtesan mentor-and promises a fortune in payment-he comes around.

It appears that someone is murdering the courtesans of Venice. All were well-known, admired for their skills-and somehow connected by a sinister event involving one of the great families of the city.

While Nostradamus attempts to use the dark arts to solve riddles which confound explanation, Alfeo finds himself led by a possibly demonic force through a maze of deceit and death. And when the master and apprentice come to the end of their intertwined paths, there may be hell to pay.

Praise For The Alchemist's Pursuit (An Alchemist Novel)…

"One of the best writers in the fantasy world today."
-Writers Write

Originally from Scotland, Dave Duncan has lived all his adult life in Western Canada, having enjoyed a long career as a petroleum geologist before taking up writing. Since discovering that imaginary worlds are more satisfying than the real one, he has published more than thirty novels, mostly in the fantasy genre, but also young adult, science fiction, and historical. Dave now lives in Victoria, BC.
Loading...
or
Not Currently Available for Direct Purchase