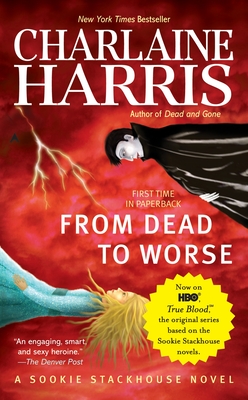 Psychic cocktail waitress Sookie Stackhouse finds herself in the middle of big trouble of the supernatural kind in this novel in the #1 New York Times bestselling series—the inspiration for the HBO® original series True Blood.

After the natural disaster of Hurricane Katrina, and the manmade horror of the explosion at the vampire summit, Sookie Stackhouse is safe but dazed, yearning for things to get back to normal. But her boyfriend Quinn is among the missing. And things are changing, whether the Weres and vamps in her corner of Louisiana like it or not. In the ensuing battles, Sookie faces danger, death...and once more, betrayal by someone she loves. And when the fur has finished flying and the cold blood ceases flowing, her world will be forever altered...

Praise For From Dead to Worse (Sookie Stackhouse/True Blood #8)…