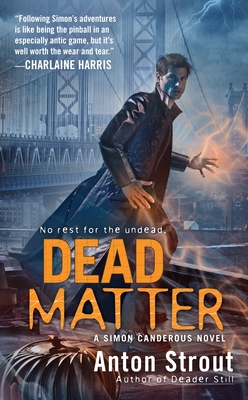 Shaking up the spirits of Manhattan

The spirit populace of Manhattan doesn't appreciate its well-deserved RIP being disturbed, and Department of Extraordinary Affairs Agent Simon Canderous is sent in to do damage control. Meanwhile, his vacationing partner, Connor Christos, is in a sorry state, and he tells Simon that each night he's being haunted by visions of his long-lost brother at his window. Simon is worried that his partner may be going crazy-or worse, maybe he's not...

Anton Strout is the author of the Spellmason Chronicles and the Simon Canderous series. He was born in the Berkshire Hills, mere miles from writing heavyweights Nathaniel Hawthorne and Herman Melville. He currently lives in historic Jackson Heights, New York (where nothing paranormal ever really happens, he assures you). In his scant spare time, he is an always writer, a sometimes actor, sometimes musician, occasional RPGer, and the world's most casual and controller-smashing video gamer. He currently works in the exciting world of publishing and, yes, it is as glamorous as it sounds.
or support indie stores by buying on
Copyright © 2020 American Booksellers Association